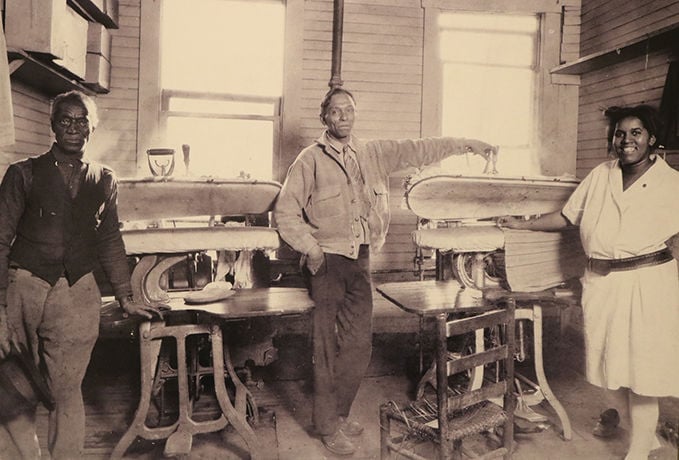 This photograph of the Matewan Dry Cleaners is displayed in the Matewan Railroad Depot Replica with John and Mary Brown (center and right) along with employee “Dad” Caples. The businesses opened in 1910. The Browns retired in 1963 after 52 years in business. 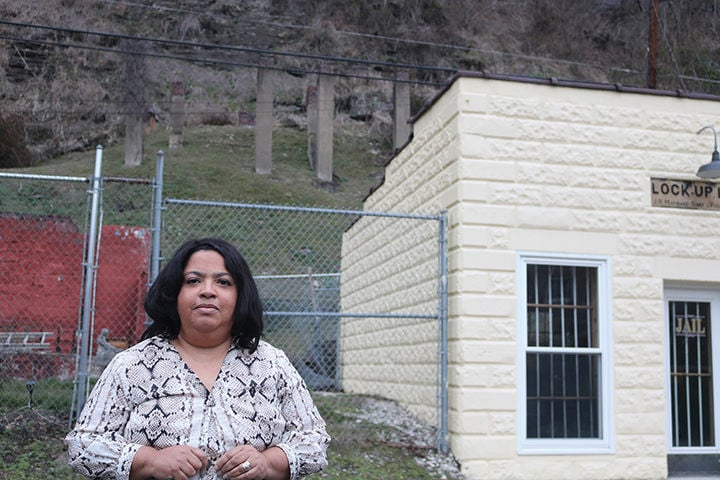 Francine Jones, a local community activist and former member of the Matewan Town Council, stands in front of the lot that was the original site of the dry cleaning business owned by her great-grandparents, John and Mary Brown, and the adjacent Matewan Lockup, which she and other town residents are trying to restore. The Matewan Dry Cleaners opened in 1910 as the first minority-owned dry cleaners in the state of West Virginia. The concrete pillars in the background were the supports of her great-grandparents home.

In 1906, John Brown earned his degree from Lynchburg Seminary College and moved to Matewan. He had earned a good reputation among the town’s business community by 1910, when he and his wife Mary opened Matewan Dry Cleaners, the first minority-owned dry cleaning establishment in the state of West Virginia.

Their grandson, Steven “Stevie” Fullen, said his grandparents retired in 1963 after having been in business for 52 years. The business closed five years later.

“They built their business by going above and beyond and offering excellent customer service,” Fullen said. “If a customer brought something in that was missing a button or ripped, my grandparents would fix it at no charge.”

The Browns were very active in their community as well and wanted to see Matewan be the best it could be. They supported local businesses, helped area school fundraisers, active members of their church and were members of the Fraternal Order of Masons and the Order of the Eastern Star respectively. The legacy they left behind was unmeasured. As a testament to the impact they had in Matewan,  the local senior citizens center bears Mary’s name.

It was this strong ethic for work and community involvement that the Browns instilled in their children. It is an ethic that has been passed down for five generations.

Fullen is a retired teacher of 38 years, and several of his siblings also became teachers. He was active in the Matewan community and served as a member of the town council for more than a decade. His brother, Johnny Fullen, was the town’s mayor for 14 years.

That dedication to service followed as the Browns’ great-granddaughter Francine Jones took up the mantle and served as a member of the Matewan Town Council, as an integral part of the Turn This Town Around program, one of the people spearheading the restoration efforts of the old Matewan Jail and Lockup and as a member of the Battle of Matewan Centennial Planning Committee.

Chris Cuomo: I feel way worse, but I got some great news

“Giving back to the community has been an important part of my life and my family’s lives since the time of my great-grandparents,” Jones said. “It is something I make sure my children learn as well.”

assessor with the Mingo County Assessors Office, currently makes her home over top of the dry cleaning building. Her patio is the lot on which her family first built their business before expanding into the adjacent building. Above that patio stands concrete pillars that supported the home in which John and Mary Brown lived.

“We all (the extended Brown and Fullen family) lived in this house together at various times. I have always said I’ve been blessed to have had more than one mother,” Jones said of living with her grandmother and aunts. “My uncles have been father figures to me and my Uncle Stevie is more like my brother.

“This home means everything to me,” Jones continued. “I thank God for the family he gave me and the values they taught me.”

It is the values in which the Browns believed they taught to their descendants — values of being a vital part of their communities, to vote and to service in civic roles. It is these same values that is being celebrated this month as Black History Month wraps ups its annual commemoration using the theme ‘African Americans and the Vote.”

In addition to the weekly programs, the Williamson Branch NAACP (National Association for the Advancement of Colored People) hosted a panel discusson on voting rights and barriers to voting over the past decades among minorities during its annual Harmony 365 program two weeks ago.