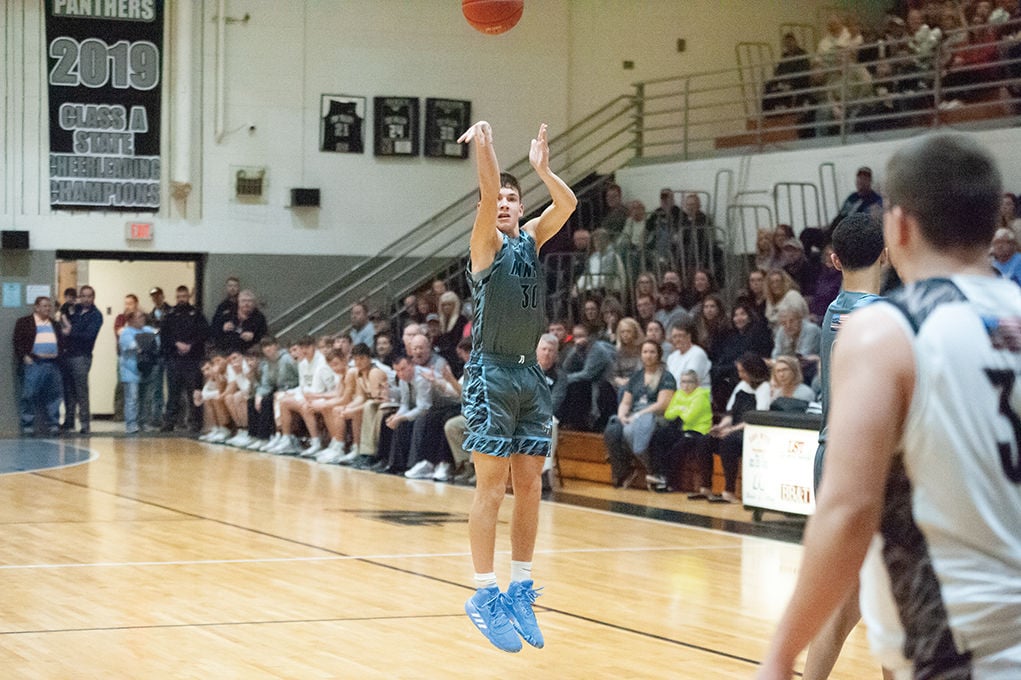 Mingo Central’s Devin Hatfield pulls up for a three Tuesday night against Tug Valley. The Miners were able to hold on to a three point lead to pick up a 61-57 win over the Panthers. 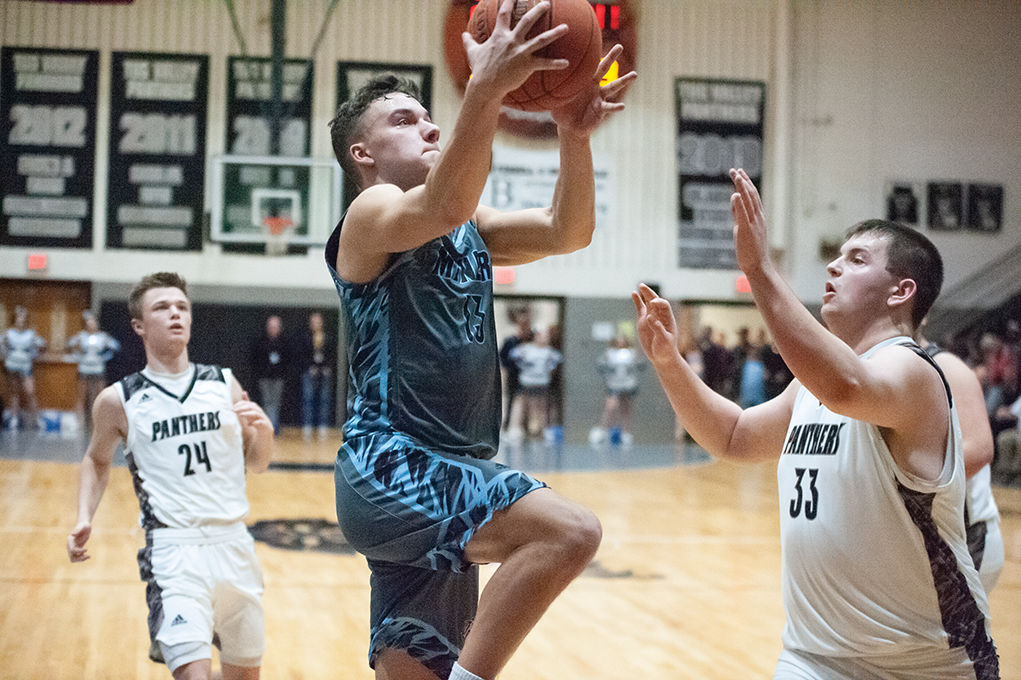 Mingo Central’s Drew Hatfield drives to the basket for a shot Tuesday night against Tug Valley. 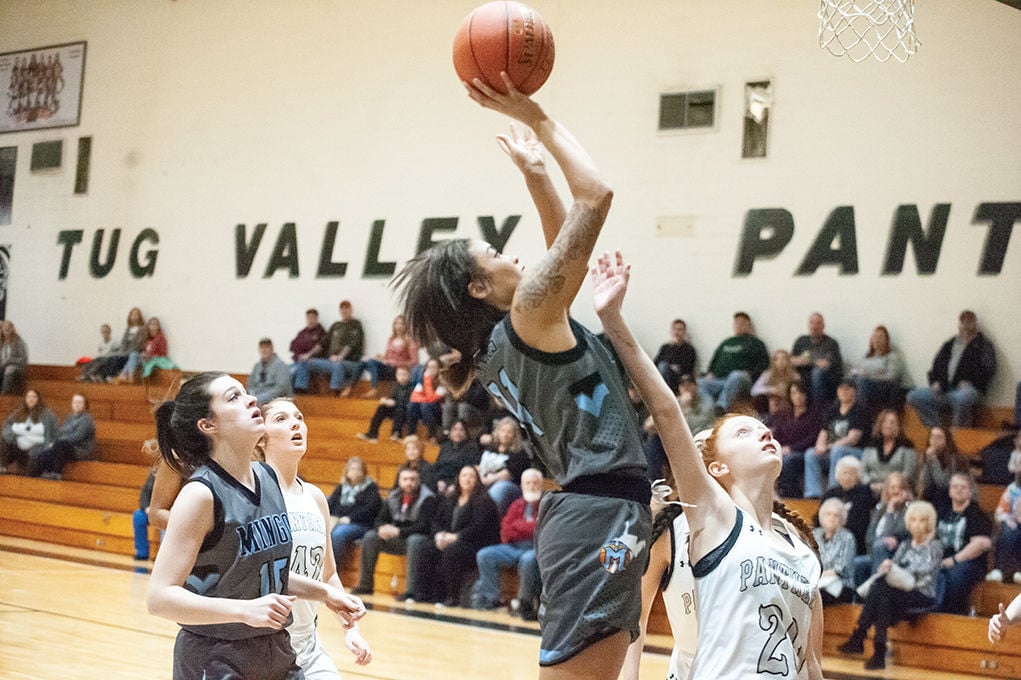 Mingo Central’s Ziah Rhodes puts up a shot under the basket Tuesday evening against Tug Valley. The Lady Miners held on to pick up a 60-57 win over the Lady Panthers. 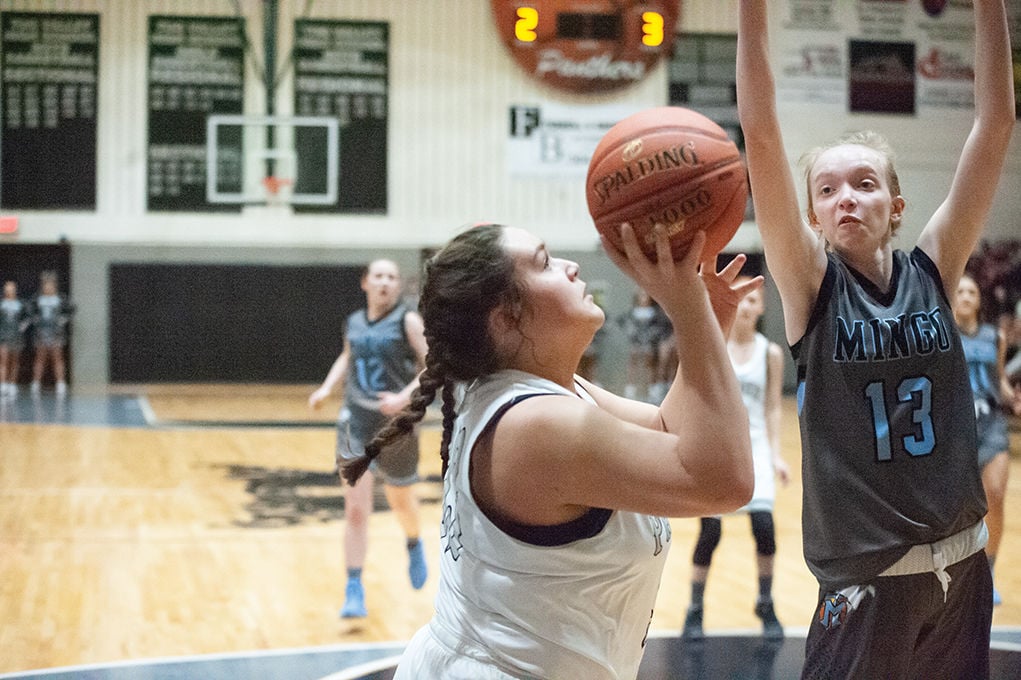 Tuesday was an epic night in high school basketball for both boys and girls. Not only that, but Mingo County may as well of become the scene for one of greatest cross-mountain rivalries to date.

With both Mingo Central and Tug Valley having successful seasons thus far, the stage was set for a showing that was sure to enchant fans of either school.

Tug Valley was the venue for what could turn out to be the starting point of a re-emergence of “the Battle for Bloody Mingo”; Playing host to a double-header that pitted the Tug Valley Lady Panthers against the Lady Miners of Mingo Central in game one of the evening and in game two the boys’ teams took to the stage to close the night.

Mingo Central walked out of Naugatuck the victors in both the girls’ and boys’ competition, winning the girls’ contest 60-57 in a late game thriller, and the boys holding on to a 61-57 win that could have gone either way if not for the Miners’ Devin Hatfield dropping 17 of his 26 points in the second half to lift Mingo Central to victory.

In the first game of the evening, the Lady Miners exploded in the fourth quarter for 20 points to sneak by the Tug Valley Lady Panthers with a three point win (60-57).

For Tug Valley Brooklyn Evans led the way in scoring as she had one of her best performances of the season hauling in a double-double with 18 points and 11 rebounds.

The Lady Panthers found themselves up 27-21 going into the half with seemingly all the momentum on great rebounding efforts on both sides of the court, along with being able to capitalize at the free throw line, shooting 60% from the stripe.

Lady Miners head coach Kim Davis-Smith made a crucial adjustment at the half switching to a high-pressure press on the defensive end.

This allowed the Lady Miners to take control of the turnover deficit in the second half, while also leading them to find more efficient shots from the field.

The Lady Miners had something click in the second half and at the 6:00 mark in the third quarter it began to rain threes on their way to the comeback victory.

Scarlette Thomason was the ringleader dropping in six of her 15 three-point attempts on the night.

Thomason was 40 percent from behind the arc, and, as a team, the Lady Miners shot an outrageous 55% from three in the second half as they went five of nine which was a much improved showing from their first half numbers (2/13 from three, 15% shooting from three).

Ziah Rohdes also had 18 points in the game and was a key safety blanket for the Lady Miners, seemingly getting a basket anytime her number was called.

Although Rhodes and Thomason led the team in scoring the unsung hero for the Lady Miners was Jenna Wagoner who late in the fourth quarter hit a clutch three to bring Mingo Central within one point of tying the game and made the score 49-48.

Wagoner also came up big for Mingo Central when she hit two free throws that gave the Lady Miners the three-point lead they finished with.

Wagoner finished with five points and eight assists on the night and played a vital role in keeping all of her teammates involved down the stretch.

The Lady Miners now sit at 11-3 on the season and after a Tuesday rivalry win are looking to continue their stellar play into the later half of the season on into Cardinal Conference play.

Tug Valley is in a similar boat as they only have some minor blemishes on their record and sit at 9-4 on the season as they look to capture the Freelance Region title and make a push for the state tournament.

University of Wyoming announces Athletics Hall of Fame Class of 2020

Badgers in the XFL: Check out performances by former Wisconsin players in Week 2

In game two of the evening the Tug Valley and Mingo Central boys’ basketball teams began preparation for their battle.

A battle that was hard fought, resulting in a narrow 61-57 win for the Miners giving Mingo Central a 2-0 lead in the rivalry this season between both boys and girls teams.

Mingo Central was able to maintain the lead throughout the entirety of the contest, except for early in the first quarter when the Panthers jumped out to 4-0 lead.

The Panthers however, never seemed to feel like the game was out of reach, going into the half only down three points with a halftime score of 23-20 in favor of the Miners.

It was Devin Hatfield for the Miners, whose scoring outburst in the final half elevated his teammates and clinched the rivalry win.

However, his older brother Drew Hatfield can be credited with a 13 point fourth quarter that led to his 23 points and seven rebounds on the night.

The Hatfield brothers combined for 49 of the Miner 61 points in the game.

Although the Miners came away with the victory, the Panthers did try to pull some last minuet heroics as Caleb May hit a tough contested 2-point jump shot with right over 3:00 left to play in the game, bringing the Panthers within four and the score sitting at 49-53.

May finished the game with 23 points and four assists, as his team was unable to complete their comeback effort.

The Miners are at a much-improved 8-3 record on the year and are showing no signs of slowing down on their journey to capturing a Cardinal Conference title and competing in the Class AA state title picture, as it seems the team is only getting better each and every game.

Tug Valley is working its way back into their winning ways going 5-4 over the last nine games, but currently hold a 5-8 record as they recover from their 0-3 start to the season.

In the end, this was a great night for high school basketball as both schools are enjoying success in their boys and girls basketball programs this season and are really good matchup against each other.

This will prove to be one better rivalries in the state for years to come given the cast of legendary coaches for each program and the seemingly endless well of talent the programs have been able to tap into.

Fans of both programs need to be ecstatic at what is yet to come going forward.

Tuesday’s double-header isn’t the end of the rivalry this season as the Lady Panthers and Lady Miners continue round two on February 2nd at 6:00 p.m.

The same goes for each school, as they square off again two days after the girls on February 4th at 7:30 p.m.

Mingo Central will host both games as Tug Valley looks to even the score and both Miner teams try to lock up the rivalry in the 2019-2020 season.