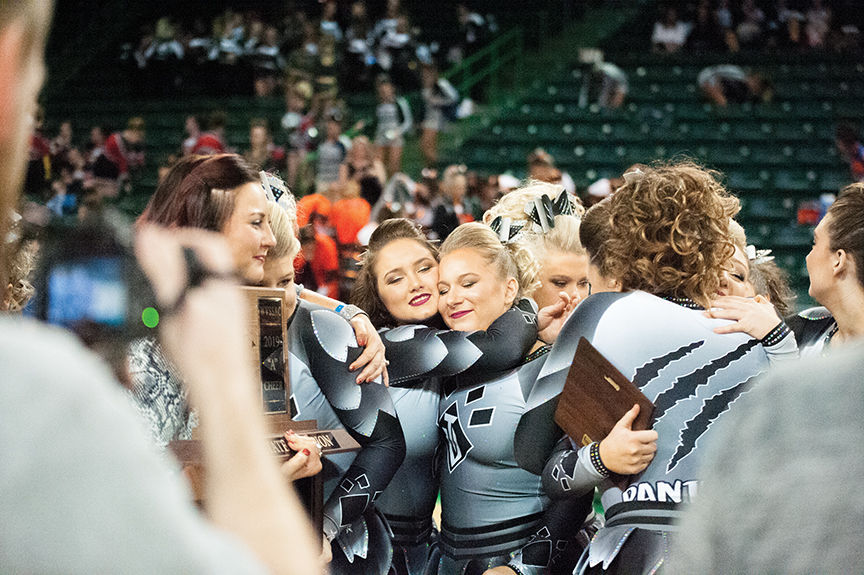 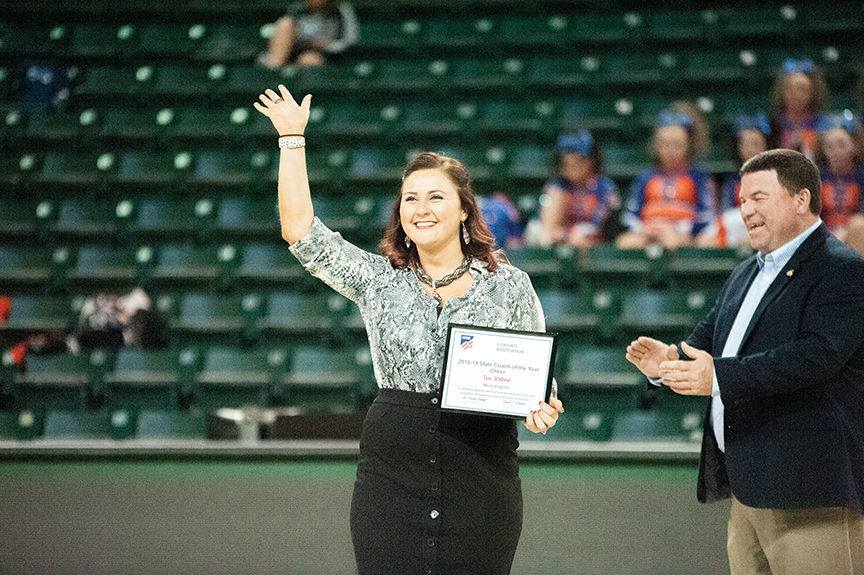 Tug Valley cheer coach Tara Wolford is presented with the Coach of the Year honor.

Becoming cheer royalty has been a long journey for the Tug Valley Cheer Panthers.

The squad endured injuries and unexpected switches to personnel throughout competitions leading up to the state competition, which was held in the Cam Henderson Center at Marshall University.

However overcoming these obstacles is what thrusts figures into greatness and breeds champions.

“Anything can happen when you’re on the floor, and that’s the thing, the judges don’t care,” head coach Tara Wolford said. “They don’t care if someone gets sick, they don’t care if you just had to switch somebody the night before. Everyone faces their own obstacles; all the judges care about is what you do in the two minuets and thirty seconds.”

Senior squad member Kelli Kirk said, “I feel like we all knew we had what it took to win and that if we didn’t, it was all on us.”

So what did the Panthers do?

The Tug Valley Cheer Panthers scored a 351.8, outscoring the next closest Class A school (Midland Trail High School) by 34 points.

Their score was the second highest in all classes at the state competition, with the highest of all the teams scored at 355.

The squad eagerly waited to preform and as they were standing in the tunnel about to make the entrance onto the floor, chants of excitement for the squad began to roar throughout the arena, as if the people in attendance were attending a royal coronation were about to take place.

Unbeknownst to those fans and everyone in attendance they were actually witnessing Cheer royalty be crowned even as the squad stepped out into the spotlight.

“It was a feeling that you can’t explain because you’re so nervous, but you’re also so excited for what’s going to come,” said senior Daniel Williams.

What Williams is referring to is the opportunity to perform in front of those cheering fans and to possibly do something with his squad mates that is unprecedented in the sports world.

Though the squad preformed as well as it did, some anxieties still fluttered throughout the minds of the coaches and squads.

Squads had gotten used to the Civic Center in Charleston being the venue for state and now just this year, it has been moved to the Cam Henderson Center which brought new challenges for preparation to every squad.

Also the squad had its own injuries and mental blockades they had to overcome on top of dealing with the challenges brought about by the new venue.

But maybe the most challenging of all the obstacles the Panthers faced was living up to expectations set upon them from the previous two state titles they had claimed in back to back campaigns.

“With this new venue, it may not have been, but it felt like the crowd was so much closer to us and you could feel the pressure from them like,  is it (their routine) going to hit? Are they going to get this third state title?” assistant coach Marie White said,.“Just the expectations,and not wanting to let our fans down. I think we wanted it for them (the squad) more they wanted it for them. We wanted them to have that third state title, to make the history and they did it.”

The Cheer Panthers overcame these worries and now sit even lonelier atop the cheer world as they look clearly into 2020 with a vision for a fourth consecutive state title.

But for now, Tug Valley will do as all great rulers do and enjoy the spoils of a hard fought battle that was deservingly won.

Long may the cheer dynasty reign that is  — Tug Valley.