Lenore’s Buddy Marcum goes up for a shot over Burch in the Mingo County Championship earlier this season. 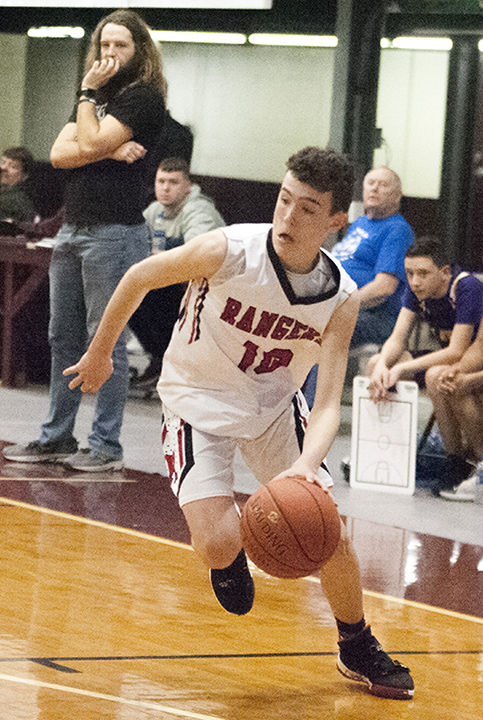 Lenore’s Joey Gollihue drives to the basket against Burch in the Mingo County Championship.

They say the crown of champion can be heavy for the weak.

Most will fold under the pressure.

But not this year’s Lenore Rangers.

The Rangers dodged all of the shots from the bullseye on their chests and backs to win back-to-back Mingo County Tournament championships.

Lenore undefeated through regular season play (17-0) as the Rangers headed into the county tournament.

The Rangers boasted an undefeated county record and along with that were rewarded the No. 1 seed.

This pitted Lenore against Gilbert in the first round however, the Rangers managed to stay poised and moved past their first round matchup.

With the stage set for the championship matchup at the historic Williamson Fieldhouse, the Rangers were set to face off against the Burch Bulldogs.

Two of the most highly favored teams stepping into tournament play.

In the end, the Rangers held off a tough Bulldogs opponent 39-32 to claim their second straight county championship.

The Rangers came out in the first ready to let it fly as Ashton Davis and Braydun Ferris both connected from three in the first quarters opening minuets.

With the Rangers up 6-0 the Bulldogs answered back with 7-1 run that tied the two teams at 7-7 going into the second quarter.

The second quarter wasn’t short on scoring as the two powerhouses traded baskets seemingly one right after the other.

Lenore took the 14-10 lead over the Bulldogs who again fought their way back to tie the game once again before the half at a 16-16 stalemate.

Steven M. Sipple: Weighing the spirit of Dabo versus Herbstreit's gloom; give me more Dabo

Football Notebook: Schmedding thankful to have year of experience under his belt

The third quarter hosted the first lead change in the game since the early minuets of the second quarter when the Bulldogs took a 9-7 lead over the Rangers.

That lead change had the Bulldogs up 24-23 over Lenore as the two teams headed into the fourth.

Though the Rangers had lost the lead, they hadn’t lost their resolve, digging deep, playing physical defense, and continuing to bang down low, the Rangers mustered a 7-0 (making the score 31-29 with Lenore back in the lead) run capped off by a Joey Gollihue put back finish to start the fourth quarter.

The Rangers stifling defense held Burch off for as long as it could, but with 3:30 left to play the Bulldogs finally got going, closing the gap and making the score 35-32 with the Rangers lead at three points.

However, two huge free throws by star center Buddy Marcum for the Rangers and a basket by Davis would be enough to eventually put the Bulldogs away 39-32.

“That’s what we do here at Lenore is win championships,” said Davis. “We don’t accept anything less.”

And to put themselves in this kind of position to compete for and win back to back county championship requires an absurd amount of work ethic in practice and poise through a tough schedule that was set up by head coach Eric Davis.

“It’s pretty tough when you start your season off with your two toughest opponents (Kermit and Burch),”said coach Davis “But, we started with a scrimmage game against Huntington Middle, and the atmosphere was like you was watching a state championship game, and I think that gave our guys some fire going into the start of the season against Kermit and Burch.”

The Rangers had an “unreal” performance against Kermit coming out with a 30-point win going into the Burch game.

However, the Bulldogs proved to be a worth championship contender for the Rangers as Lenore only managed to pull out a two point victory in the two teams first meeting.

Not only did the Rangers endure a hard regular season schedule, but along with it a even more challenging practice regimen that pitted these young men against each other in mismatches to force each team member to bring out the best.

“During scrimmages in practice one team could be up by like 15 or 20 and coach would change it to where we were down six with a minuet left,” said Ferris “being able to fight back in those situations in practice really helped through the season.”

Because of the challenges these young men welcomed and overcame whether it be from the intense practices or the tough regular season schedule the Lenore Middle School Rangers proved they are what they say they are by completing such a tough set of tasks.

And to be put simply, they are champions.