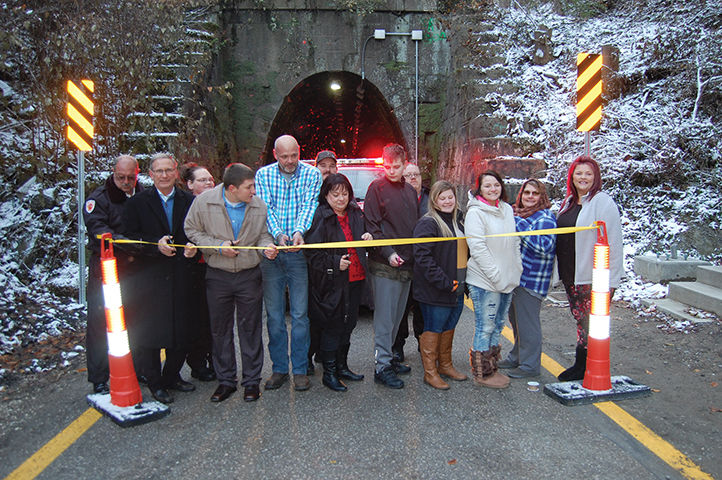 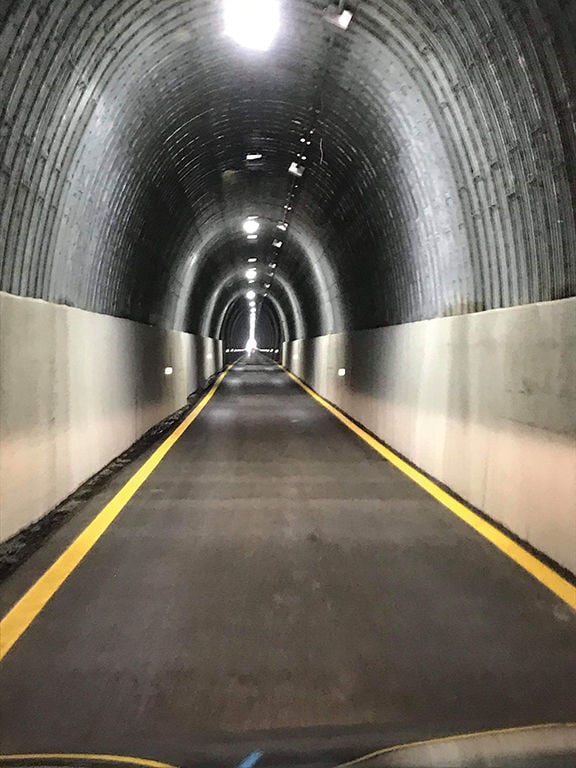 For more than a half-century of its 127-year existence the historic Dingess Tunnel has served as vital connector between people living in the Dingess/Twelve Pole/East Fork areas and those living in other communities of Mingo County.

In that time the nearly mile-long, single-lane stone masonry passageway has undergone only a handful of upgrades — the last having come four years ago when a section of the roof began sagging and required the installation of new steel support beams.

Along with the major drawback of it accommodating only a single lane of traffic, for most of the time, the tunnel has also been unlighted and the roadway itself has continually been susceptible to furrowed pavement and chuckholes, which in turn have always been filled with water, primarily due to an incessantly seeping ceiling.

However, other than it still being an at-times inconvenient single-lane roadway, the tunnel’s other shortcomings are now a collective thing of the past.

Due to the efforts spearheaded by a grassroots community group known as the Dingess Action Committee, whose members work to improve the three areas, as well as the efforts of state Sen. Ron Stollings, a ribbon-cutting was held Tuesday afternoon to commemorate a recently-completed $5.5 million renovation project inside the tunnel.

Work on the project, some of which is still ongoing along the outside peripheries of the tunnel involving ditch lines and other similar water drainage work, included steam-cleaning the tunnel’s stone masonry, rehabilitating the ditches running parallel to the roadway, tearing out and replacing the old pavement, and adding a $1 million lighting system.

Johnny Nick Hager, who is president of the DAC, said after he and other members of the group first targeted the tunnel as a possible doable project, earlier this year they began in earnest to seek out those individuals and government agencies they believed could help bring it to fruition.

“I first contacted Sen. Stollings in April and right away he began contacting department of highway officials and it kind of took off from there,” Hager said.

Who will be Trump's political heir?

Who is Chief Justice Roberts?

Hager said work began the second week of June and as of last Wednesday (Nov. 6) all the work inside the tunnel had been completed.”

Stollings, who attended the ribbon-cutting, said acquiring the necessary funding for any kind of highway project is always a major undertaking and never guaranteed.

Although the Dingess Tunnel is a designated historic landmark and that this distinction alone from the outset greatly enhanced the project’s chances, he said getting the amount of funding that was required to complete even such a much-deserving endeavor was still anything but a given.

“When we get a request like this we just try to run it up the flagpole and see what happens,” he said. “In this instance, we really did consider ourselves the squeaky wheel so we went about doing everything we could possibly do to get the grease.

“I made this project a major priority with the DOT and with everyone working together we were successful in our efforts. But it wasn’t just me, there were other senators and delegates pushing for this ... it was simply the successful result of everyone pulling in the same direction.”

Among other projects the DAC has undertaken and effectively attained since he founded the organization last November, Hager said just a month later in December the group launched Dingess’ inaugural and what going forward will become the community’s annual Christmas Tree Ceremony.

The group has also spearheaded two successful community clean-ups at the tunnel, a clean-up at Breeden, is credited for the installation of the first-ever Dingess welcome sign and, in coordination with Chief John Hall Jr. and the East Fork Volunteer Fire Department, just this summer successfully held the community’s Fourth Annual 4th of July Celebration.

“Being a community action group, we operate solely on the donations of the community,” he said. “And because it’s a group made up of volunteers, we’re also always looking to add as many other volunteers from the community as we can get.”