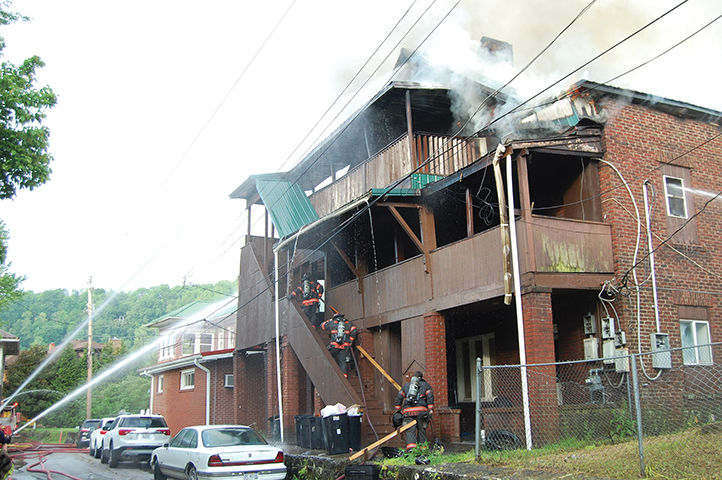 Firefighters attempt to bring down a blaze which destroyed an apartment building at Elm Street in Williamson May 16. A murder investigation was launched as a result of the fire after badly burned human remains were found in the partially collapsed building. A total of seven people were also displaced as a result of the blaze. 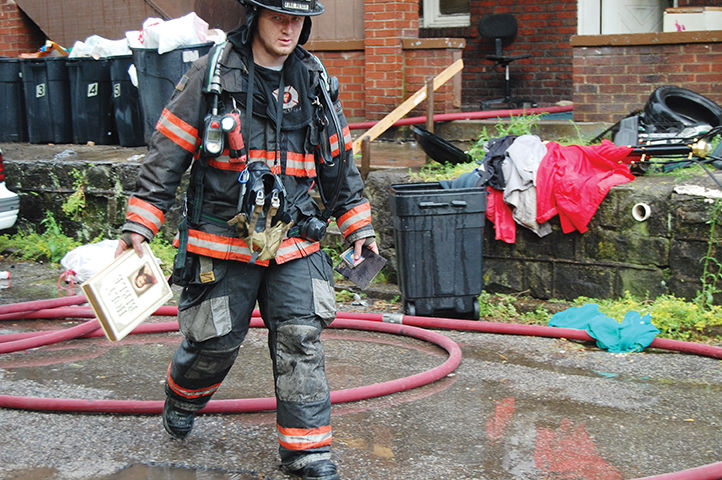 Three people are dead and currently four individuals are facing murder charges as the result of three separate incidents having occurred in Mingo County — in Williamson, Delbarton and Lenore — over the last week.

In Williamson, authorities said a massive fire that began 6:30 a.m. Saturday, May 16, in an apartment building on Elm Street is believed to have been intentionally set by three men to cover up a murder that occurred earlier that morning in a vacant third floor apartment.

The "badly burned human remains" of an as-of-yet unidentified person were discovered during a search of the debris of the partially collapsed building hours after firefighters had brought the fire under control and were ready to leave the scene.

The discovery, authorities said, was made after an apartment tenant came forward later Saturday and stated that he believed a man had been killed by three other men prior to the fire and that his body was still in the rubble.

Warrants were issued for Charles Henry Jarvis, 46, of Williamson, and Terry Michael Jarvis, that same day for their alleged involvement in the crime.

On Tuesday, Charles Henry Jarvis was arrested by the WPD and the MCSO.

As of presstime the third suspect, Terry Michael Jarvis, was still being sought.

Chief Joey Carey said firefighters from the Williamson Fire Department, as well as the Chattaroy Volunteer Fire Department who provided mutual aid, had just completed "mopping up" after several hours of being on the scene and were preparing to leave when an apartment tenant advised him that he had witnessed a fight between the victim and the three men prior to the fire.

"This guy, who along with all the other tenants lost everything he had, at around 4:30 (p.m.) came up to me and said he had witnessed a fight and that he believed the man had been killed, and that he thought the fire might have been set to cover up the crime," Carey said. "I took him to the Williamson Police Department, where he was interviewed again and where he made the same statement. I went back to the scene with the fire marshal and, along with some of the other guys who were still on the scene, we began a search. I found the body under the debris a short time later."

Carey said four of the six apartments were occupied and that seven people altogether were displaced as a result of the fire. Three of the residents, he said, had to be transported to the hospital and treated for smoke inhalation.

He said two firefighters also received 2nd degree burns to their facial area during the early stages of the fire, which he noted ultimately took about 45 minutes to bring under control once firefighters got to the scene.

See how state coronavirus trends evolved in May

Due to fire and structural damage, he said the building, which was owned by 20th District Del. Nathan Brown and his law partner, Joshua Ferrell, was considered to be a total loss. Two single family homes on either side of the fire structure received minor damage, he added.

Through the subsequent investigation, police said Church and both Jarvis men had allegedly gone to the apartment intending to steal money and drugs that they believed were there, as well as to carry out "retaliation for an earlier incident involving two females who were staying at the residence."

In the criminal complaint against Church, police said an apparent fight ensued between the victim and the three other men, at which time the victim was allegedly "beaten, struck and stabbed with a knife by the defendants" just prior to them setting fire to the building.

The remains of the victim were sent to the medical examiner's office in Charleston to determine identification and an exact cause of death, with the results of both still pending as of press time.

The WPD, the State Fire Marshal's Office, and the WFD continue to investigate this incident.

In a second incident occurring earlier this week, police said a Delbarton man was arrested and charged with the murder of his grandfather.

According to the Mingo County Sheriff's Office, on Sunday, May 17, deputies were dispatched to Scarlet Road in the Delbarton area in reference to David Lee Manns, 36, who allegedly at sometime earlier stole a number of items from his grandfather, Homer Ray Manns.

Upon the officers' arrival, the MCSO said, David Lee Manns fled into a nearby wooded area, ultimately evading the officers long enough to return, threaten, and then fatally shoot his grandfather multiple times with two different handguns.

Officers said Manns also allegedly fired shots towards three other people, "placing them in reasonable fear for their safety," before eventually surrendering to the deputies.

Manns was charged with murder (first degree) and three counts of wanton endangerment.

A third incident in Lenore resulted in the shooting death of one man and a murder charge being leveled against another.

According to the MCSO, on Wednesday, May 20, James Rodney Thompson, 51, of Williamson, got into a verbal altercation with Jason Allen Adkins, which ultimately escalated and resulted in Thompson pulling a handgun and shooting Adkins.

Police said Thompson fired the gun at Adkins six times, striking him twice in the chest.