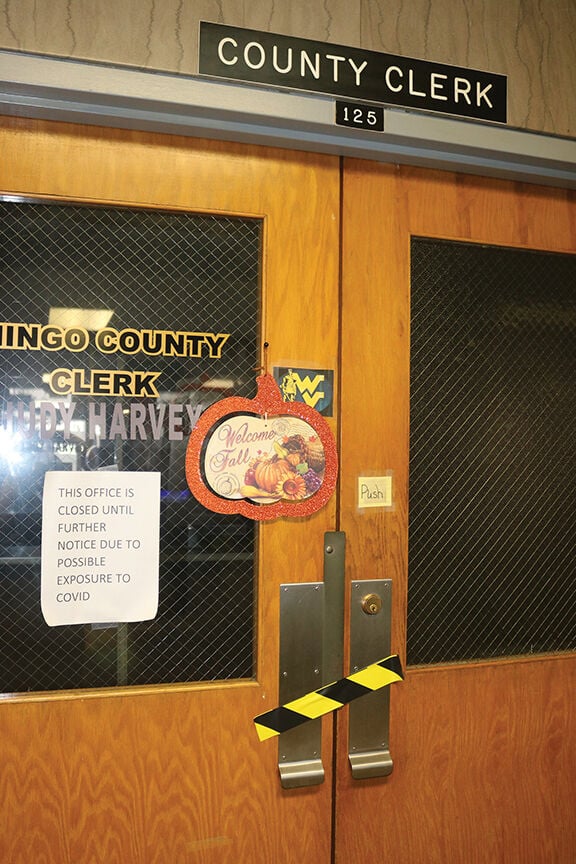 Mingo County Prosecutor Duke Jewell advises Commissioner Thomas Taylor and Commission President Diann Hannah that he will be recusing himself as the commission’s legal representative during the 2020 general election canvass. The canvass has been convened and recessed several times this week because of a possible COVID-19 exposure at the Mingo County Clerk’s Office. 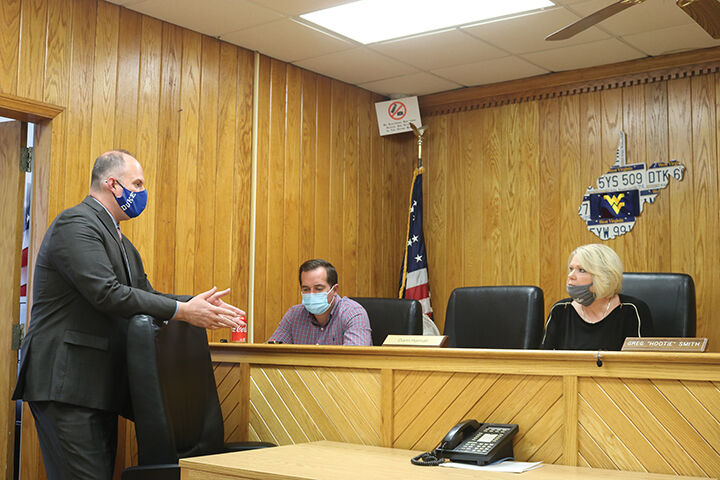 Mingo County Prosecutor Duke Jewell advises Commissioner Thomas Taylor and Commission President Diann Hannah that he will be recusing himself as the commission’s legal representative during the 2020 general election canvass. The canvass has been convened and recessed several times this week because of a possible COVID-19 exposure at the Mingo County Clerk’s Office.

The lights are darkened and police tape seals the doors at Mingo County Clerk’s office. A sign taped to the door tells the public that the office is “closed until further notice because of a possible exposure to COVID.”

The Mingo County results of the 2020 general election held last week have not been certified as of yet because of this even though the official canvass was set for Monday, Nov. 9, The canvass was convened by the Mingo County Commission and almost immediately recessed because the entire county clerk’s staff is in quarantine.

Commission President Diann Hannah explained that all of the election results, absentee votes and provisional ballots are locked in the clerk’s office and only can only be retrieved by the clerk’s staff.

Even though the canvass cannot be conducted until the clerk’s office reopens, Commissioner Thomas Taylor made a motion to recess until the next day. This will be a process that will be repeated each day until the canvass can be completed.

“We are required by law to conduct the canvass as soon as possible,” Hannah said. “So, we have to convene each day just in case. But, I can tell you with surety that no vote counting will be done until next week.”

County Prosecutor Duke Jewell told Taylor and Hannah that under statute he is considered the county’s legal advisor during the official proceedings,however, he would be removing himself from the canvass and suggested the commission find another attorney for the proceedings.

Jon Ossoff defends claim that GOP senator is a 'crook'

“As an abundance of caution, I am recusing myself as your counsel for the purpose of the canvass,” he said. “This will be for me and my entire staff as well. I am doing this to avoid any appearance of impropriety. The only office that can be affected by a canvass is my own race.”

Jewell passed Republican challenger Brock Mounts in the election night results by a narrow margin of only 12 votes. Provisional ballots and any absentee votes,not counted on election day, will be reviewed and, if validated, will be added to the preliminary totals during the canvass. Because of this, the outstanding votes have the potential to change the outcome of the prosecutor’s race.

Based on records at the county clerk’s office, 700 absentee ballots were mailed to area voters with only 650 being returned in time to be counted on Tuesday, Nov. 3. The clerk’s office is required to accept any absentee ballot received between election night and the canvass that bears a postmark with the date of the election.

Provisional ballots are votes that are cast by a voter but have been challenged by an election official for some reason. Registration and residency issues are the main reasons a ballot is challenged. It will be up to the canvassing board to review those ballots and to admit them into the vote total or to invalid and reject them.

The clerk’s office will not be able to open until Monday, Nov. 16, at the earliest, Hannah said.