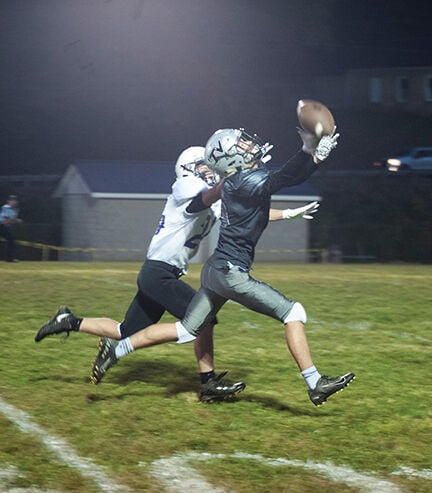 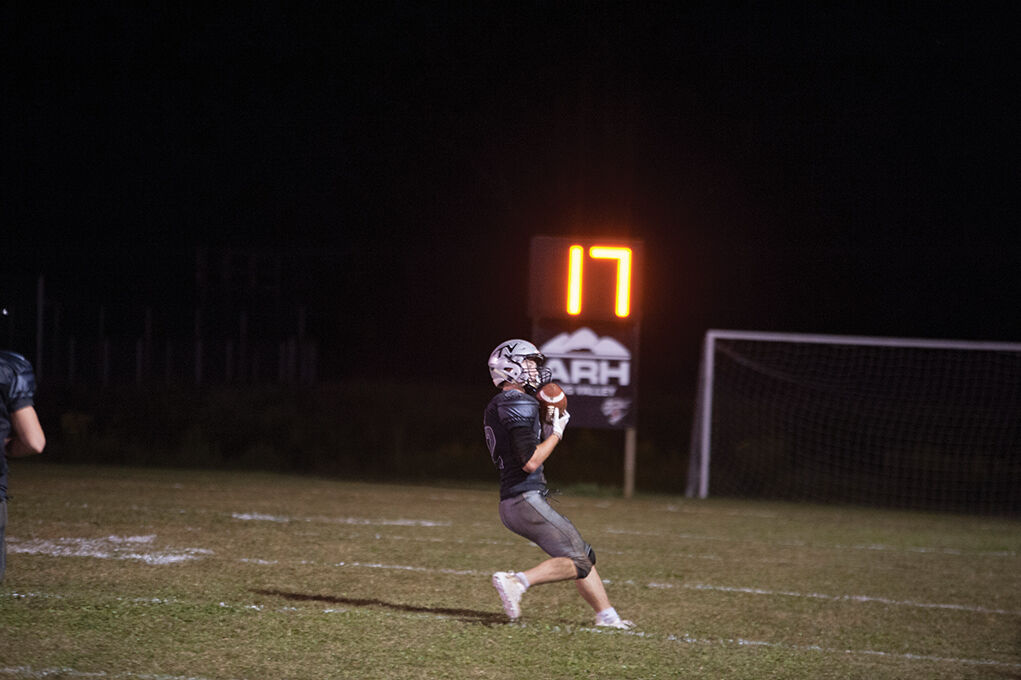 Tug Valley’s Caleb May pulls down an interception against James Monroe Tuesday night at home. The Panhters pulled out a tough 38-36 comeback win.

James Monroe was the first to get on the board, 6-0, with 2:56 remaining in the first quarter recovering an unforced fumble and returning it for a TD.

The Panthers struck back right after their kick return as senior quarterback Joby Sorrell lofted a 36-yard TD pass to Cealeb May to tie the game up at 6-6.

Going into the second quarter tied at 6-6 and just getting the ball back after forcing a three and out, the Panthers were looking to gain the lead.

However, another fumble ended Tug Valley’s drive with 8:42 left in the second quarter.

The Mavericks capitalized on the fumble driving to the 30 before finding the end zone on a 30-yard strike themselves, overtaking the Panthers 12-6.

James Monroe was forced to punt again on their following drive, but as the Panthers were marching down the field, the Mavericks managed to pick Sorrell off for an interception that the Mavericks returned 58–yards with 4:05 left in the second quarter.

The Mavericks pushed their lead to 20-6 with 2:31 to play in the first half as they scored on a 24-yard run and converted the two-point conversion.

Down two scores, the Panthers needed a big play before the half to begin a comeback.

Tug Valley took control of the ball and began to drive down the field in their no-huddle offense.

After making it to the 30-yard line with only 45 seconds to play, Sorrell found May on another 30-yard strike that cut the Maverick lead to 20-14.

Beginning the second half, the Mavericks were set to receive and were looking to bring their lead back to two scores.

With the Panthers looking to drive back down and potentially take the lead the Maverick defense was desperate to stall Tug Valley’s momentum.

At 10:23, the Mavericks seemingly did just that, forcing a Tug Valley fumble.

After reaching the red zone James Monroe capitalized, the Mavericks scored to go up 26-14, on a 20-yard TD run.

The Panthers offense needed an answer.

May was that answer.

With 8:30 left in the third quarter, Sorrell connected with May, for their third TD of the game, on a 19-yard TD pass.During the play, May was in a jump ball situation and ripped it from the defenders hands.

After cutting the Maverick lead to 26-20, the Panthers needed the defense to step up once again.

The Tug Valley defense rose to the occasion forcing a turnover on downs with 5:49 left to play in the third quarter.

The Panthers were swiftly moving down the field with Sorrell completing passes to Ethan Colegrove and Jarrett Baker on the drive for big gains that had the Panthers inside the five-yard line.

With 4:26 left,  Sorrell found Baker again for a three-yard TD pass tying the game at 26-26 after a failed two-point conversion by the Panthers.

The Mavericks took over possession and began to drive and on fourth and long was forced to pass.

With 53 seconds remaining in the third quarter, Tug Valley’s Tanner Kirk came away with an interception that gave the Panthers a chance to take their first lead of the game.

The fourth quarter began as the Panthers were driving, but the drive wouldn’t last long.

The two teams traded possession of the ball back-and-fourth throughout the final quarter of play.

The Mavericks took the lead late in the fourth on a 30-yard TD strike, putting them up on the Panthers, 32-26.

The Panthers knew they needed to pull out all the stop at this juncture in the game.

Tug Valley coach Hady Ford dialed up a hook and ladder play that was executed perfectly by Colegrove who caught the initial pass and tossed it to May, that resulted in a 36-yard TD.

The Tug Valley defense was called upon again to give the Panthers an opportunity to complete the comeback and pull out the win.

Baker came away with an interception with 1:12 left in the game and returned it 20 some yards, giving the Panthers a chance to go for the win.

On the offense’s first play, Sorrell found Ian Reed for a 36-yard TD pass to give the Panthers their first lead of the game, 38-32, with 1:02 remaining in play.

The Mavericks had to air it out as they took back over on offense, but, the Panther defense was ready.

With seconds on the clock, Tanner Kirk came away with a game clinching interception that allowed the Panthers to kneel their way to the final buzzer.