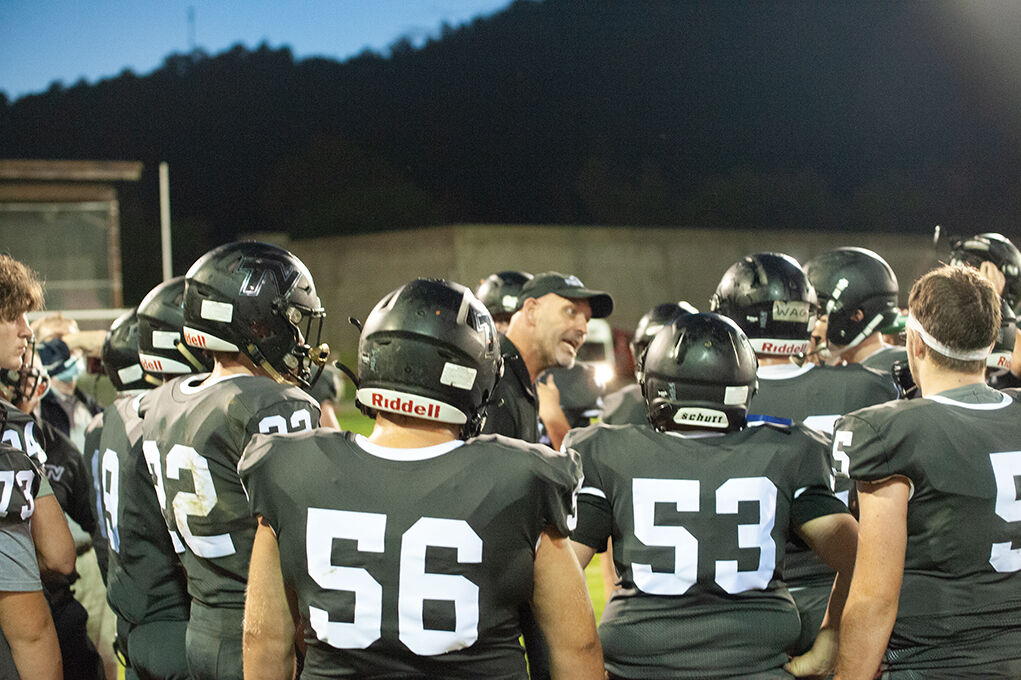 Tug Valley’s Hady Ford talks things over with his team Friday night against Sherman. The Panthers fell to Sherman 38-14 to move to 0-2 on the season. 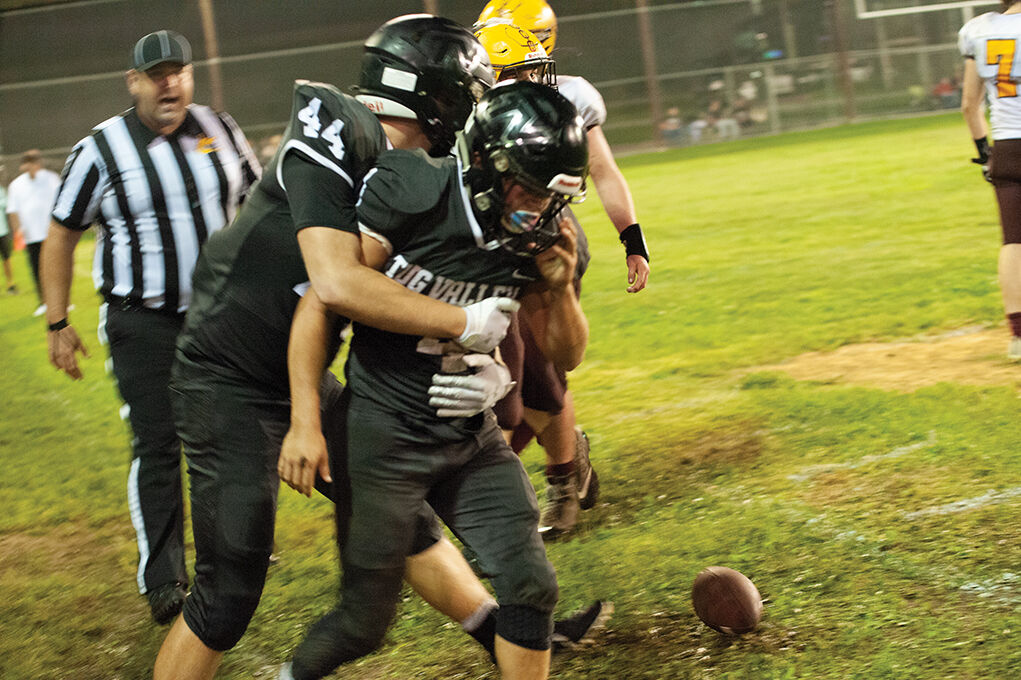 The Tug Valley Panthers fell to 0-2 on the 2021 season after failing to contain the visiting Sherman Tide, losing by a final score of 38-14 on Friday night at Lefty Hamilton Park.

On one hand, it was dubbed the “Hall of Fame Game” due to the first-ever Tug Valley High School Athletics Hall of Fame class being inducted in a ceremony at the high school prior to the game.

On the other hand, it was the first game at Williamson’s Lefty Hamilton Park since November 12, 2010, when the defunct Williamson Wolfpack played it’s final game at the stadium against Valley-Fayette before the school consolidated with Burch, Matewan and Gilbert to form Mingo Central High School in 2011. The Pack lost that game, 34-12.

The excitement of the first game at the field in 11 years did not translate into a victory for the Panthers, though.

The two teams held each other scoreless throughout the first quarter, but Sherman struck first blood in the second.

With 9:32 remaining in the first half, Christopher Winnell bolted into the end zone on a run from two yards out to give the Tide a 6-0 lead after an unsuccessful two-point try.

The Tide increased their lead before halftime. With 2:55 left in the frame and the ball at their own six yard line, Timothy Hager connected with Andrew Simpson for a 94-yard TD toss. Christopher Winnell ran in for a successful two-point conversion, putting Sherman ahead 14-0 at intermission.

The early stages of the third quarter saw the Tide up their advantage over the Panthers. Hager and Dalton Rollo would hook up on a 36-yard scoring pass. The two-point attempt failed, and Sherman’s lead stood at 20-0 with 8:43 left in the third quarter.

The frustration for Tug Valley would continue with 34 seconds left in the period. Austin Davies intercepted a pass from Buddy Marcum and took it 13 yards to the house. The score swelled to 26-0 after an unsuccessful two-point conversion.

The Tide kept pouring it on in the fourth quarter. With 7:21 left in the contest, Winnell ran in for a TD from nine yards out to put Sherman up 32-0. That remained the score after a failed PAT.

Hady Ford’s team would finally crack the scoreboard late in the frame. With 3:55 remaining, Tanner “Boo Boo” Kirk scored on a one yard TD run to make the score 32-6. The two-point try was no good.

Their deficit would go back to 32 points in short order, however. Colby Buzzard took the ensuing kickoff for a Tide TD. The two-point conversion was no good, and Sherman upped their command to 38-6 with 3:25 left in the game.

Despite the lopsided score, Tug Valley didn’t throw in the towel. With 26 seconds left in the game, Marcum let a pass fly to Nick Alley who scampered into the endzone for a 23-yard TD. Tanner Urconis converted the two-point conversion with a pass from Marcum to decrease the Panthers’ deficit to 38-14, which would end up being the final score.

Kirk ran with determination and turned in a tremendous effort despite the game’s outcome, gaining 148 total yards on 21 carries. Also contributing to the running game for Valley was Elijah Fluty with 39 yards on three rushes, Marcum with eight carries for 24 yards, and Adam Slone with 16 yards on three carries.

Marcum completed four passes out of 23 for 75 yards and a TD, but was picked off three times. Alley, Slone and Ethan Colegrove caught one ball a piece for 20, 20 and 35 yards, respectively.

Slone led Tug Valley in tackles on the night with 11. Following him in that department was Alley with eight, Kirk with seven, Jonathan Wagoner with five, Fluty and Colegrove with four each, Urconis, Marcum and Ashton Davis with three each, Kyle Hodge with two, and Kendrick Allen and Alex Vance with one each.

The Panthers overall record fell to 0-2 with the loss. They will look to get into the win column for the first time in 2021 on Friday night when they return to Bob Brewer Stadium for a home contest against Symmes Valley, Ohio. The venue was closed last Friday night due to maintenance issues, which caused the game to be moved to Williamson. Kickoff from Naugatuck is slated for 7:30 p.m.