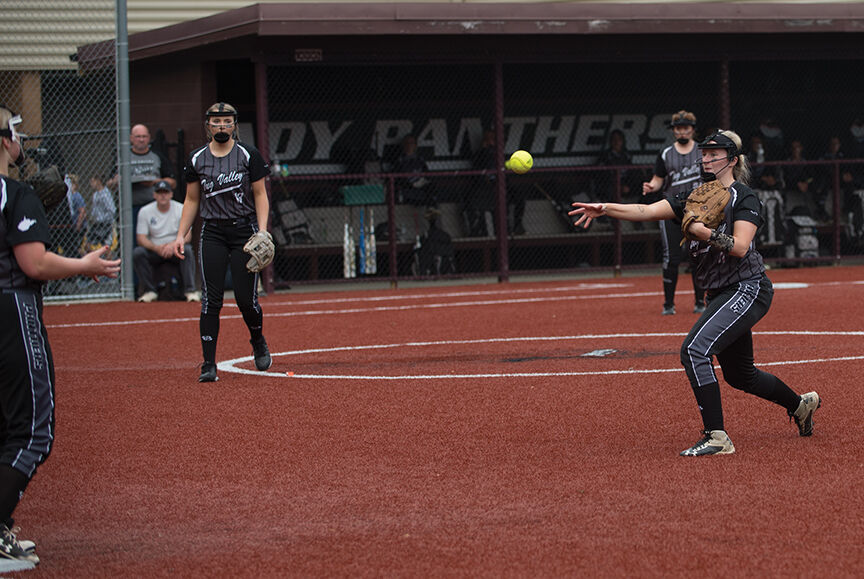 Tug Valley’s Kaitlyn Copley tosses the ball to first for a force out against Pikeville Monday evening. The Lady Panthers knocked off Pikeville 5-3. 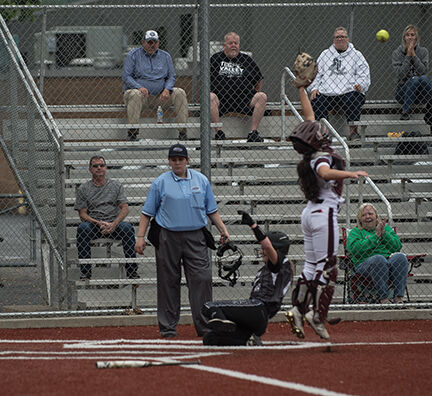 Tug Valley’s Cassidy Griffery slides into home for a run against Pikeville Monday evening. Griffey tripled off the fence and scored on an errant throw to third. Tug Valley picked up a 5-3 win over Pikeville.

Tug Valley got going in the top of the second inning.

Kaitlyn Copley reached on an error to get things going in the top of the second inning. Haleigh Muncy followed with a single to put two runners on. Kinna Justice followed by hitting a single to load the bases.

After a Tug Valley strikeout, Autumn Hall drew a walk with the bases loaded to drive in another run and push the lead to 2-0. Cassidy Griffey followed with a two RBI single to push the lead to 4-0.

With runners one first and third, Tug Valley tried to steal second, Pikeville pitcher Isabelle Rose took the cutoff throw as the runner from third base headed home. Rose threw the runner out at the plate to end the inning.

Pikeville got on the scoreboard in the bottom of the third inning. Larren Collins hit a leadoff single and Molly Coleman followed with a single of her own. Kelcie Adams added a single to load the bases.

With the bases loaded and no outs, Cassidy Slater reached on an infield RBI single to cut the lead to 4-1.

That was the only run that Pikeville could muster with the bases loaded and no outs.

Playbook learning, on-field competing and … napping? How Packers rookies have benefited from a true offseason

Pikeville got going again in the bottom of the fourth inning. Shana Ray reached on a leadoff walk. Rose followed with a single. Collins reached on an error.

That set up Coleman’s two RBI triple to cut the lead to 4-3.

That was as close as Pikeville would get, though.

Tug Valley added an insurance run in the top of the fifth inning.

Griffey hit a triple off the fence and as she slid into third an errant throw allowed her to score and push the lead to 5-3.

Hall picked up the win on the mound for Tug Valley. She threw the complete game and gave up three runs on eight hits with nine strikeouts.

Rose suffered the loss on the mound for Pikeville. She threw two innings of work and gave up four runs (none earned) on three hits with two strikeouts and two walks.

Ford came in relief and threw five innings of work and gave up one run (not earned) on on hit with 11 strikeouts.