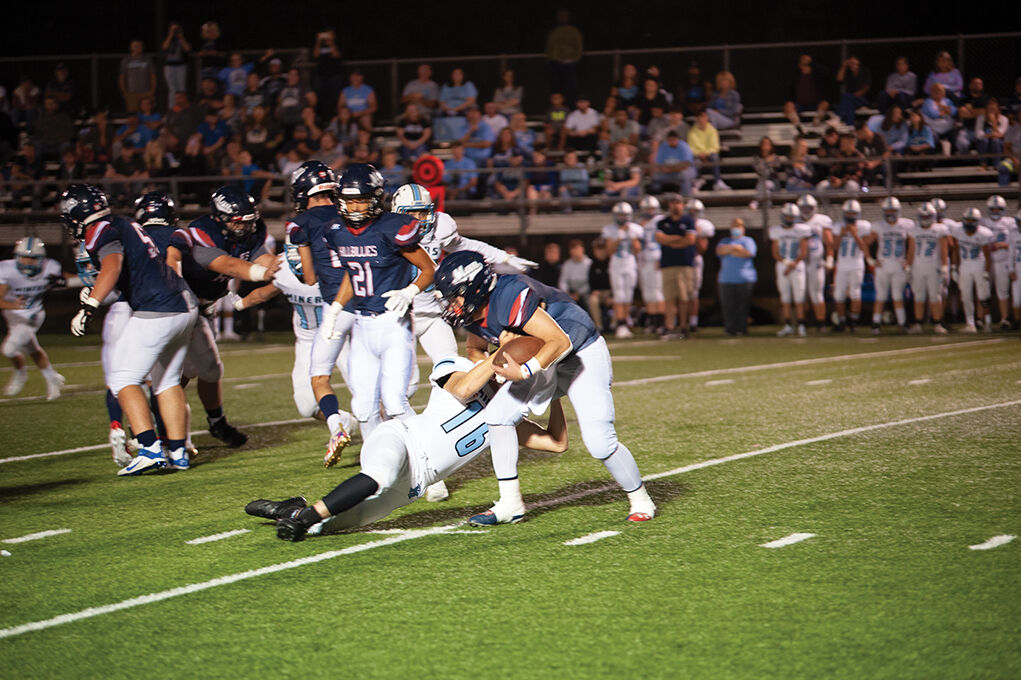 Mingo Central’s Evan Breeding connects for a tackle in the backfield Friday night against Man. 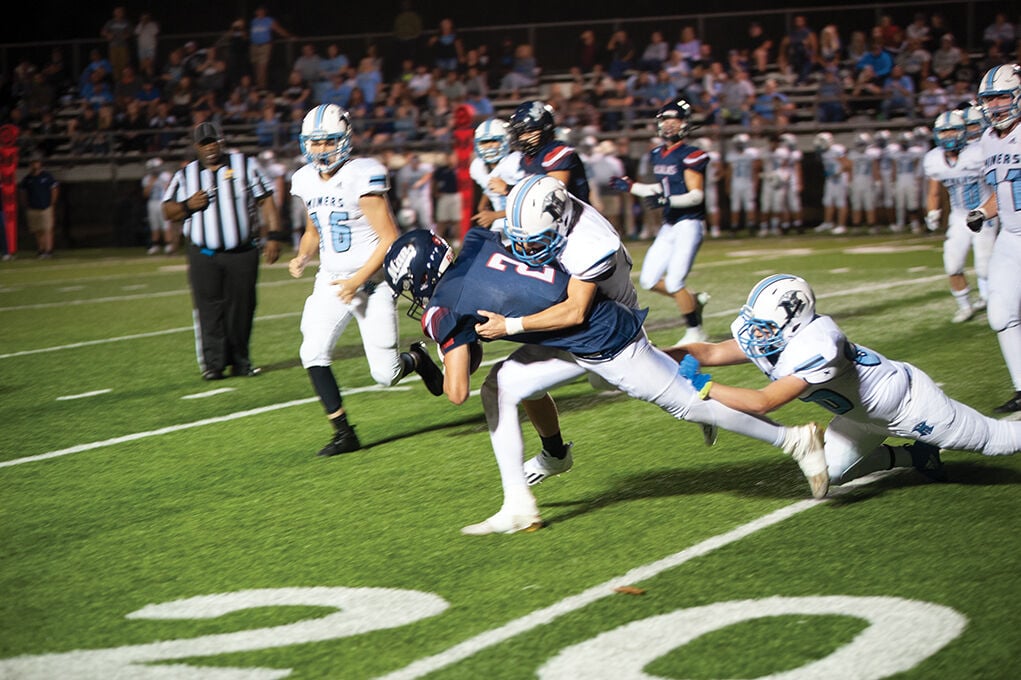 The Miners defense collapse on the ball carrier Friday night against Man. The Miners fell to the Hillbillys, 7-6.

In what was a defensive battle from the opening kickoff, but Mingo Central failed to come through in the clutch as the offense was stopped on a late fourth quarter drive, thus preserving a 7-6 Man win on Friday night.

The two teams held their own on defense for much of the night, stopping drives and forcing turnovers.

Mingo Central quarterback Chris Ross was picked off by the Hillbillies in each of the first three drives to begin the game. The Miners’ Preston Smith had an interception of his own in the first half.

Ross attempted a Hail Mary on the final play of the first half, but he was sacked.

Late in the third quarter with the game still scoreless, things got chippy between the two squads, but both teams regained their composure shortly after.

Hunter Blankenship recovered a fumble on a late Man drive in the period, setting the Miners up in great field position deep in Hillbillies territory.

They did not capitalize on it with points, however. On a fourth down play, Ross had a wide open Preston Smith in the left corner of the end zone, but the pass was dropped and Mingo Central turned it back over to Man.

The next drive for the Miners yielded a much better result. Mingo Central became the first team to crack the scoreboard as Ross ran a one-yard sneak into the end zone as time expired in the third quarter. The two-point conversion was no good, and the Miners led 6-0.

'That was truly culture versus skill,' says Fleck after his shorthanded Gophers fend off NU

With just under eight minutes left in the game and Mingo Central trying to extend their lead, they gave the ball back to the Hillbillies on a fumble.

Man took advantage. With 3:42 left in the game, quarterback Jeremiah Harless found a wide open Justin Grimmett in the end zone for a TD from 41 yards out. Jaxon Tipton sent the extra-point through the uprights, and the Hillbillies took their first lead of the night at 7-6.

The Miners took over at their own 35-yard line on the ensuing drive. Looking for the late go-ahead score, they turned the ball over on downs.

The Hillbillies took over in Miners territory and gained a first down while forcing Mingo Central to use all of their timeouts at the same time. This put the game on ice and Man won by a final score of 7-6.

Mingo Central could not be stopped on the ground. They gashed the Hillbillies for 219 yards rushing, but they only accumulated 23 yards passing for 242 yards of total offense. They gained 17 first downs.

Despite the success running the football, the Miners left points on the field as they committed five turnovers.

Norman Kennedy rushed for 154 yards on 32 carries, while Kaeden Bolding had 55 yards on eight attempts. J.R. Perry turned two carries into 13 yards, and Ross carried 10 times for negative three yards, but scored on a one-yard quarterback keeper to break the scoreless tie at the end of the third quarter.

The Miners lost the game despite holding Man to just 102 yards of total offense.

Mingo Central fell to an overall record of 1-2 on the 2021 season with the loss. After opening with three straight road games, they will look to defend Miner Mountain for the first time this year on Friday night as they face the Poca Dots in a home contest. Kickoff is scheduled for 7:30 p.m.