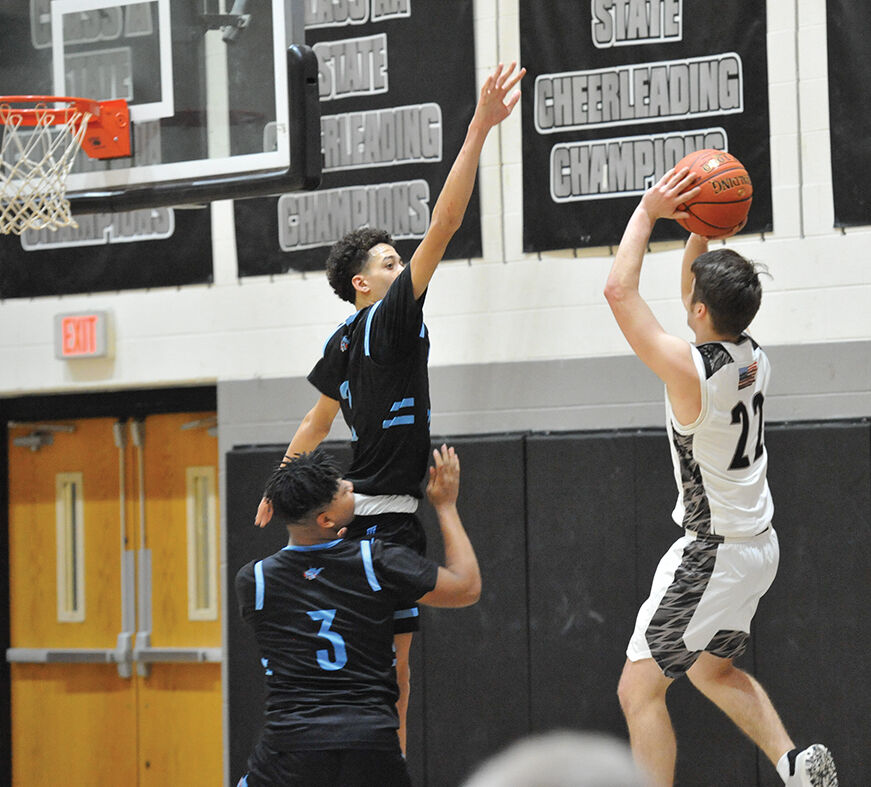 Tug Valley’s Caleb May goes up for a jumper against Mingo Central’s Jarius Jackson. The Panthers picked up a 62-59. 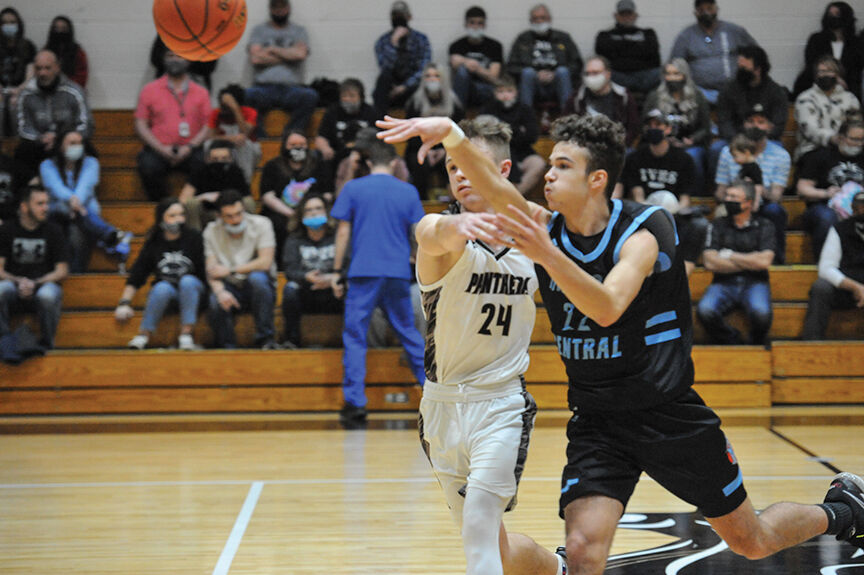 As basketball and winter sports have finally been given the “OK” from the WVSSAC, fans were excited to see the “Battle of Bloody Mingo,” be one of the first games played Tuesday night in Naugatuck.

In what was an instant classic, per usual, the Panthers and the Miners scrapped it out tooth and nail with Tug Valley winning the battle in the end 62-59.

The Panthers had two players in double figures, as the senior leadership stepped up early with Caleb May scoring a game-high 23 points and Easton Davis chipping in 14 of his own.

Tug Valley head coach Garland “Rabbit” Thompson’s squad outscored the Miners 18-12 in the first period. The Miners got hot behind the line in the second period, behind three pointer’s by Kyle Campbell and Ethan Thomason, but Ian Reed’s finger roll with 36.7 to play, gave Tug Valley a big boost as they would take a 31-25 lead to the locker room.

Stan Elkins’ Miners offense exploded to open the third quarter. Justin May’s three pointer to open the third cut into the Panthers lead, however, it was Campbell’s three almost a minute later and cut the lead to two at 33-31 that prompted a Tug Valley timeout with 6:25 left in the third to stop the momentum.

And it worked. (Caleb) May’s jumper in the corner pushed the Tug Valley lead back to 35-31 with just under six minutes to play.

The Miners continued their onslaught from behind the arc, but Tug Valley seemed to keep them in range. Mingo Central fought back with 4:21 left as Zion Martin got it started going two for two at the free throw line to cut the lead to one at 38-37. James Evans added a layup underneath at the 3:21 mark, and capped off by another big Thomason three to push the lead to 43-39.

Davis stopped the bleeding momentarily on his basket underneath with 1:53 to play, but the Panthers looked in trouble at a point. Evans put-back off a miss gave the Miners a 45-41 advantage with less than a minute left in the third.

Caleb May then took over, hitting a huge floating jumper in the lane, then brought Tug Valley back to within one on a huge three just before the third quarter buzzer to make it 47-46.

Husker WR Oliver Martin feels 'fast and explosive,' and it's apparent to his coaches, teammates

Joby Sorrell gave Tug Valley the lead to open the fourth. His three pointer gave the Panthers a 49-47 lead with 7:46 to play in the game. Mingo Central’s Jarius Jackson’s pretty spin move in the paint tied the score at 49 with 6:21 to play.

However, Tug Valley went to their bigs in the final minutes. And it paid dividends. Colegrove went to the line with just under six minutes left. He made one of two to give the Panthers a one point advantage at 50-49. Davis scored on Tug Valley’s next possession and Colegrove returned to the line three minutes later after he scored and drew the foul. After a Miner miss, they found Davis on a run out to give the Panthers a 59-54 lead with 2:59 to play.

Mingo Central made one final run as Martin’s three with 2:40 to play cut it to 59-57. May made both of his free throws on a one-and-one attempt, with Jackson scoring the Miners final points at the line with 11.1 to play. Justin Hall put the nail in the coffin with 6.0 ticks left as he made one of two free throws to set up the 62-59 final.

The two teams are scheduled to play round two of the battle on March 30, this time, on Miner Mountain.

Tug Valley is scheduled to host Van Senior Thursday night, as Mingo Central will hit the road as they visit Wyoming East Friday night. Both games slated for a 7:30 p.m. tipoff.